We explore what autism is and what it isn’t, and explain identity-first language and how access to communication and information can be improved for autistic people. 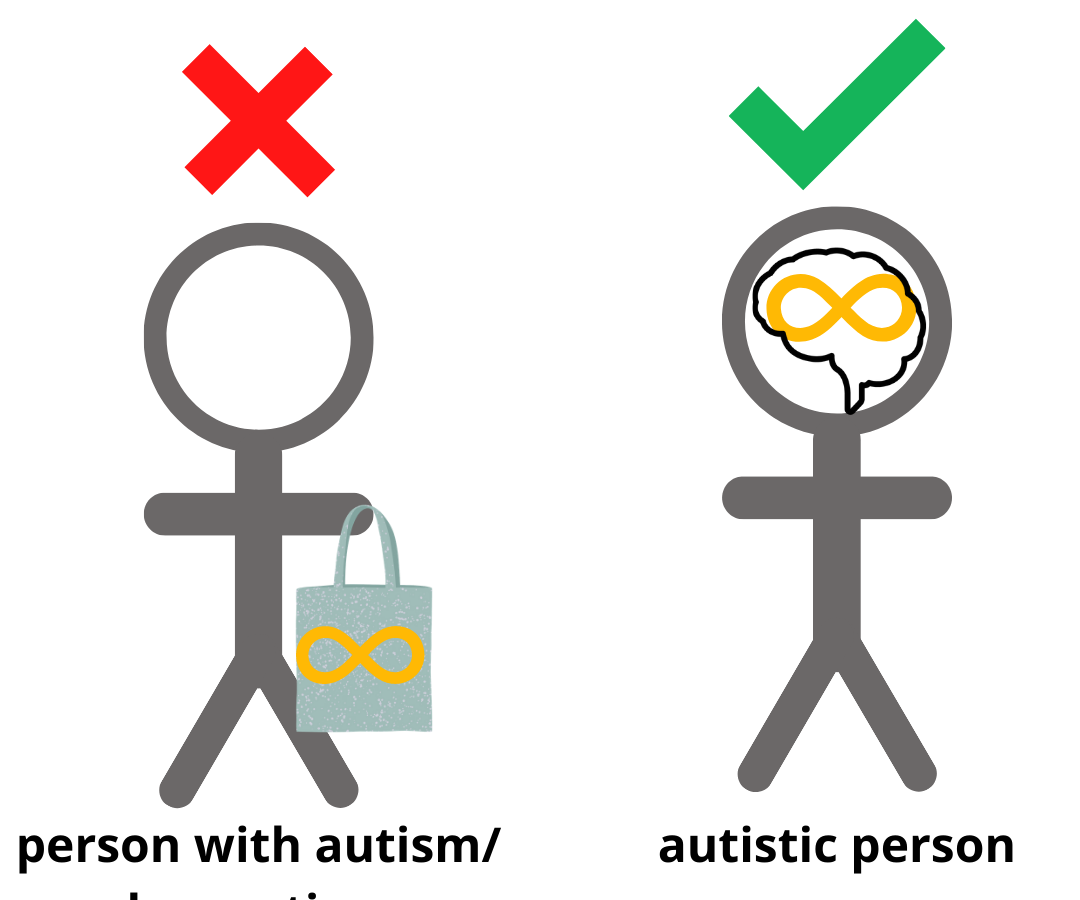 What autism is not:

Autism has historically been (and frequently continues to be) viewed as a list of deficits, generally as a negative comparison to neurotypical people.

But understanding and knowledge of autism is increasing and changing, and autistic people are leading the shift in narrative, changing the language.

Always respect the individual’s preference, but the default should be identity-first. There are many reasons for this; you can find lots of articles about it here.

Because every autistic person is different, there is no one-size-fits-all rule; find out what their specific needs are and don’t assume. What works well for one person might be the complete opposite of what works for another.

Discover 50 ways to help autistic people on the website www.autisticnotweird.com

Figures for the number of nonspeaking autistics vary depending on the source (country, date, etc), from 25% up to 40%.

Autistic people communicate through a variety of methods: speech, sign language, Makaton, typing, AAC (Augmentative and Alternative Communication), or their own methods, including behavior. All methods are equally valid; it should not be viewed as a hierarchy with a speech at the top.

Royal College of Speech and Language Therapists definition:
These days, thanks to technology, there are many options for AAC, and they have made a huge difference to disabled people’s ability to communicate (not just for autistics, but also for other people for whom speech is difficult, impossible or unreliable). It should not be regarded as inferior to speech; rather, it should be accepted, embraced and normalised.

Myth: autism is a learning disability

Fact: autism is a neurological, developmental difference; some autistics may have a learning disability alongside being autistic, but the two are separate.

Myth: the autism spectrum is a learning disability

Fact: the autism spectrum is more circular, like a colour wheel, with different people having strengths and weaknesses in different areas.

Myth: autism is a male condition

Fact: people of all genders can be autistic; the current ratio of diagnosed autistics is 3:1 assigned male to assigned female (the figures do not currently account for those who do not fit the gender binary) but there is a historical and continuing underdiagnosis of non-males.

Fact: skills, abilities and strengths among autistics are as diverse as among neurotypicals – many autistics are more arts- and humanities-oriented (our autistic member of staff has a Bachelor’s degree in English Literature and a Master’s in creative writing, and is not at all mathematically- or computer-oriented!)

Fact: autistic social skills are simply different from the dominant norms and conventions; research has demonstrated that when autistics interact with each other, the perceived “deficits” disappear, and they interact effectively and accurately

Fact: many autistics do feel empathy, sometimes intensely; however, it is shown and expressed very differently from NT ways

Myth: autism has a “look”

Fact: autism does not have a “look” and you generally cannot tell someone is autistic just from looking at them; many autistics get told they “don’t look autistic” but this is due to outdated stereotypes. That said, a lot of autistic people can tell when someone is autistic (they call it “autie-dar”, “autism radar” and other variants)!

Being Autistic in the Workplace

Last year two work colleagues met over a shared lunch on a sunny Devon day and chatted about what it meant to them to be autistic in the workplace.

You can hear their informal conversation on the right. Below are some useful resources to go alongside it:

The Moment That Changed Everything Podcast (referenced at 1hour 1min)